Nothing in the budget for us, say cross section of people

An already over burdened public hit out at the 2022 budget saying it had failed miserably to address the steeply rising cost of living, while various transport sectors affected by the covid pandemic lockdowns say they are sce ptical about the Finance Minister's relief proposals. Shortages and price hikes have affected all social strata whether upper, middle or lower income classes as daily expenditures skyrocket, they point out. Despite the pandemic, the people were expecting some form of relief either for their businesses or through price control of essential commodities. A household helper, A. Rajah, said he was fed up with all politicians as none of them thought of the ordinary people. "I went to buy some items for the house I work for. I feel so bad because I was unable to buy all the goods that the house owner told me to get from the money he gave me," he said. Speaking of his own household woes, he said he spent a lot of time in long queues to get kerosene and gas but failed to do so. "My family is surviving due to the kindness of my employers who provide us with cooked meals," he said. Nadeeka Dhanasinghe (42) who engages in a private business lamented that the budget had not brought them any kind of relief. “Even though the pandemic affected the economy, if businesses were given a helping hand we could have at least managed the rising cost of living,” she said. B. M Hanifa, a retiree, said he saw neither good nor bad in the budget as he accepted the fact that the country had to spend the dollars to pay back loans and therefore the government was unable to give relief to the people. “The value of the rupee has depreciated against the dollar. Therefore, more taxes are imposed so the government can pay back those loans. The situation has caused the cost of living to rise but there is no solution other than paying back the loans and trying to stay without getting into more debt," he said. He said policy makers should come up with ways to earn more dollars so that the general public would not be forced to bear the strain of the country's debts. House wife Dushanthi Ranasinghe ( 42) said as a mother of two it was difficult for her to manage household expenses along with the increasing class fees of her two children. “My elder son is sitting for A/ Levels and we have to spend for his online classes, pay the bills and spend for ever-increasing daily expenditures from my husband's sole income," she lamented. She blamed that Government for not controlling the market prices via the budget. Transport providers also expressed scepticism over the budget. All Island Inter District School Children Transport Service Association's chief N. M. K Harsichandra said although Rs. 400 million has been allocated to help the transport sector, which was badly affected by the pandemic, they were not sure how the Government was going to distribute the money. “We don’t know whether this was just said in the budget speech or something that will actually materialise. We wanted the Government to exempt us from paying the interests of the loans we have taken as we find it difficult to pay the instalments," he said, pointing out that they faced heavy losses during the closure of schools due to the lockdown. Commenting on the Rs. 600 million budget relief package to the three-wheel drivers, All Island Three wheel Drivers and Owners Association chairman Sunil Jayaruck questioned how the Finance Ministry or the Central Bank came up with such a figure without having any prior meetings with them. He also said they had no idea how the allocation would be distributed among threewheel owners. “Our one request had been to establish a body to monitor three wheel drivers and owners and maintain a formula for fares,” he said, adding that they were sceptical that such a body would be created. He said he believed that the promised Rs 600 million was nothing but empty words. P r ivate Bus Owners Association Gamunu Wijeratne also expressed similar concerns. He said although they were aware that Rs. Rs. 1.5 billion relief package had been allocated in the budget for the public transport sector, he had doubts that the Government would implement it. However striking a positive note, food importers said they welcomed the budget as they understood the Government's need to impose taxes to cover losses made due to the pandemic. Essential food importers Association President Nihal Seneviratne told the Sunday Times that they had written to Finance Minister Basil Rajapaksa and Treasury Secretary S. R. Attygalle requesting that the Social Security Levy charged at the Customs on the CIF value of essential food items be brought under the special commodity levy, as an advanced tax. He said they have requested that both large and small scale importers be required to pay the levy, thus making it a level playing field. 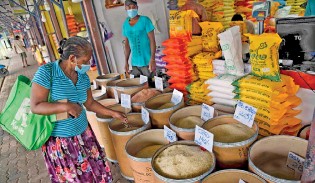