NKB, a people’s bridge, because priority was given to the displaced

The New Kelani Bridge (NKB) construction shows that, if the Government really wants to do something, it could, a specialist from the main funder Japan International Cooperation Agency (JICA) said. Senior Project Specialist Namal Ralapanawe was referring to the successful resettlement of hundreds of families to make way for the bridge. While mega projects were often a nightmare for those who were displaced, the NKB project ensured they were the priority in a way most other recent Sri Lankan development initiatives had not. The NKB would be open to the people after its finishing touches. It would connect the Orugodawatte and Ingurukade intersections with the Colombo-Katunayake Expressway and is the first extradosed bridge in the country. This a combination of cable-stayed and concrete beams. The project was carried out by JICA, which financed it though an official development loan, the Road Development Authority (RDA) and the Highways Ministry. Good practices included, but were not limited to, direct technology transfer, resettlement in consultation with the affected, and equal opportunities and pay for women in science, technology, engineering and maths, the official said. The RDA and JICA relocated 320 families around the construction area to the “Laksanda SevanaSalamulla” housing complex. Effective resettlement was the main requirement for a project to go forward, insisted Ms Ralapanawe, an engineer. Both JICA and Sri Lankan guidelines had to be followed to clear funding. The local frameworks were the Land Acquisition Act and the National Involuntary Resettlement Policy (NIRP). The Act did not bind Government agencies to consult with the people to be resettled and to pay full compensation, Ms Ralapanawe said. "People without title deeds have no protection in the Land Acquisition Act. While the NIRP is better, it still does not fulfil the standards in the JICA guidelines and is only a policy," she said. There were extensive discussions between JICA and local authorities on the conduct of resettlement. It was a major part of the project as there were a large number of families. And the process for the NKB was vastly different to other initiatives, Ms Ralapanawe said, because of full consultation with the affected parties at every stage. Resettlement alone took a year to complete with sufficient time granted to people to adjust. An Environmental Impact Assessment (EIA) took place alongside. Evidence of public consultation for the resettlement action plan and an EIA are mandatory in JICA guidelines. The agency will not consider a project until both are done integrating environmental and social considerations. These reports were then sent to an independent advisory committee in Japan followed by a 90-day disclosure to the Japanese people during which questions must be answered. This was because JICA was responsible for ensuring Japanese taxpayers money was used responsibly. In Sri Lanka, the word resettlement is narrowly defined to include only people having to move. For JICA, however, it encompass land acquisition and the the resettlement action plan. The RDA Project Director Darshika Jayasekera, and her team visited every household to explain the procedure. They also noted their sentiments. There was a survey into how many people and households were affected, their economic status and jobs. The JICA principle is that, regardless of title, every person displaced by the project must be given the equivalent or improved living standard as compensation. Japanese guidelines also require communities to stay together and for places of resettlement to be in close proximity to original places so that activities like school and work could resume easily. An official said the RDA was committed to providing an improved living standard and acquired units from a nearby Urban Development Authority (UDA) low-income family apartment complex under construction. They were given to affected households free of charge as compensation for resettlement. The title was transferred with the deeds written to both husband and wife. There were two types of compensation packages. Either a family could get an apartment with the title and allowances for moving, furniture, electricity and water or they could get financial compensation. The RDA took teams of people to see the apartments being built. "Initially, some were reluctant to move. But when they saw what was happening, they agreed to resettle," Ms Ralapanawe said. The RDA arranged training and demonstrations on storing food in the kitchen, using stoves, keeping houses tidy, livelihood restoration and new jobs. There was instruction on making sandals, shoes, clothes, etc. Some men used a share of the compensation to buy three-wheelers. But there were also negative incidents involving garbage disposal and narcotics, Ms Ralapanawe said. The apartment complex has three buildings, two of which were occupied by the re-settlers who had arranged for segregated garbage collection with the Municipal Council. But occupants of the other tower reportedly threw rubbish out of their windows instead of disposing it downstairs. The pandemic also led to garbage piling up and initiatives taken by young people to clean it up were not successful. Now, there were three people from each building assigned with collecting rubbish. As for the proliferation of narcotics, the problem existed before resettlement. The authorities were aware of it and occasionally acted on tip-offs. But long-term solutions were required. 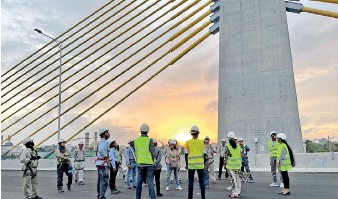