BREDA, Nov 20, (AFP) - Dutch coronavirus demonstrators held fresh rallies on Saturday, a day after 51 people were arrested in an “orgy of violence” in Rotterdam that left two people in hospital with bullet wounds. The Netherlands went back into Western Europe's first partial lockdown of the winter last Saturday with at least three weeks of curbs, and is now planning to ban unvaccinated people from entering some venues. A few hundred protesters angered at the latest measures gathered in Amsterdam on Saturday and a similar number marched through the southern city of Breda. It followed the Rotterdam unrest where police said they had fired both warning and targeted shots and used water cannon. “Fifty- one people were arrested during the major disturbances on Friday evening and night on Coolsingel ( street) in Rotterdam . About half of them were just underage,” Rotterdam police said in a tweet. Police had said earlier that they fired several warning shots but that “at one point the situation became so dangerous that officers felt compelled to shoot at targets”. The city's mayor Ahmed Aboutaleb denounced an “orgy of violence”, adding: “The police have felt the need to draw a police weapon in the end to defend themselves.” Despite the violence a day earlier, around 300 protesters marched through the southern town of Breda near the Belgian border on Saturday carrying banners with slogans such as “No Lockdown”. Organisers said they opposed Prime Minister Mark Rutte's plans to exclude the unvaccinated from bars and restaurants. A group that had called an Amsterdam protest for Saturday, United We Stand Europe, said on Facebook it had cancelled the rally because “last night, all hell broke loose in Rotterdam”. But several hundred flag-waving protesters still gathered in central Dam Square, watched over by police vans, according to Dutch media and images on social media. The Dutch government condemned the violence in Rotterdam. “The riots and extreme violence against police, riot police and firefighters last night in Rotterdam are horrifying,” security minister Ferd Grapperhaus said on Saturday. “The police and the public prosecutor's office are doing their utmost to track down, prosecute and punish these rioters.” Thousands rally against Covid-19 vaccinations in Australia MELBOURNE, Nov 20, ( AFP) - Thousands of protesters decrying Covid-19 vaccinations gathered in cities around Australia Saturday as smaller counter-rallies supporting health measures also marched. Australia's vaccine program remains voluntary and highly successful, with nearly 85 percent of the population over 16 fully vaccinated and life returning to relative normality for those double-jabbed. But protesters rallied Saturday across several of Australia's major cities against vaccine mandates, which are not universal and have only been applied to certain occupations by state authorities. In Melbourne, a crowd of several thousand called for state leader Daniel Andrews to be jailed and voiced anger over controversial new proposed pandemic powers. Police said up to 10,000 gathered in Sydney. There were no reports of clashes, nor was there any sign of the gallows or calls to hang political leaders which had been filmed at earlier Melbourne protests -- sparking concerns the rallies were encouraging violence. Although the views of the crowd in Sydney were wide-ranging, a heavy presence of anti- vaccination and shadowy conspiratorial views were promoted by speakers and on many signs. Around 2,000 protesters also gathered in Melbourne to oppose the anti- vaccination rally -- one of the first counter- demonstrations since the pandemic began. 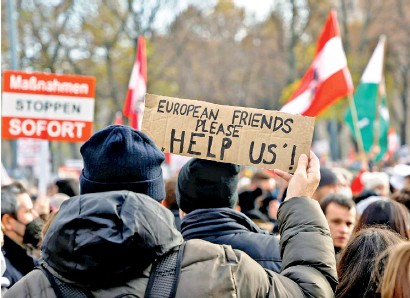