ABBA have announced that their first Christmas single, ‘Little Things’, will arrive as a special CD release next month. The festive track, which appears on the Swedish icons’ new album Voyage, will be available physically from December 3. An accompanying Christmas- themed video is also expected, with the band telling fans to “watch this space”. The single includes the lyrics: ‘Little things/ Like your sleepy smile/ As the brand new day is dawning/ It’s a lovely Christmas morning.’ Also the band sings of the “joy Santa brings“, “stockings full of nice little things” and “tiny elves with wings’. In a review of Voyage, NME described the track as “a twinkly Christmas song that’s sickly- sweet even before [ ABBA] bring in a children’s choir. Frankly, it would feel even more mawkish if it weren’ t for the poignancy in Fältskog and Lyngstad’s beautifully mature voices.” Last week saw ABBA land a UK Number One album with Voyage as well as earning the fastest- selling vinyl of the century. The group’s first studio release in 40 years registered 204,000 chart sales in the seven days since its release. ABBA are set to showcase their new record with a string of ‘revolutionary’ concerts at London’s Queen Elizabeth Olympic Park in 2022. Swedish supergroup ABBA made a triumphant return to the UK music charts on Friday, going straight to no. 1 with their first album in 40 years, ‘Voyage’. The record is the fastest- selling album of the year so far, the UK’s Official Charts Company said, with 204,000 chart sales in its first week. Only three other music acts have passed the 200,000 sales figure in the last decade: Adele with ‘ 25’, Ed Sheeran with ‘ Divide’ and One Direction’s ‘Midnight Memories’. “We are so happy that our fans seem to have enjoyed our new album as much as we enjoyed making it!,” ABBA said in a statement. “We are absolutely over the moon to have an album at the top of the charts again” ‘ Voyage’, which received mixed reviews from critics, is the band’s first album since 1981’s ‘The Visitors’. It is ABBA’s 10th no. 1 album in Britain. 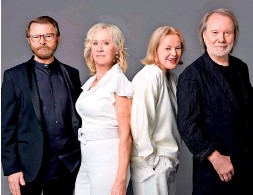